The March 2015 issue of National Geographic’s cover caught my eye. “The War on Science“. It was by Joel Achenbach. I immediately knew I wanted to read that article and I did as soon as I had a chance. Wow. What an eye opener.

This article explained so much to me. The author, of course, did not mention breastfeeding, people rarely do. However, the points they made about how humans create their belief systems allowed so many puzzle pieces fall into place for me.

Why was I, with so much scientific evidence on the health and social/emotional benefits of breastfeeding, still having to defend breastfeeding as being the optimal food for human babies? Because, I learned, most humans don’t based their beliefs on science. They base their belief on their overall experiences and what their community says.

Oh. No wonder it feels like I am hitting my head against a wall. I am!

It turns out, that we are more likely to listen to our families (or do the opposite depending on your family!), our friends, our colleagues, and our neighbors, than experts. Our community is where our belief systems and truths are formed. Not by research articles and documentaries. All of the “facts” don’t matter if your tribe is telling you the opposite.

Then why do I believe in science? Well, apparently choosing to believe in science is a belief as well. I learned to believe that when people spend time and money looking at something closely, I should look at the subject closely too. However, I will say, I am a skeptic. When I read a research article I look at who funded the research, what was the agenda, the sample size, the methods used for data collection, and then I decide how much of the data provided will be incorporated into my belief system. But the real bottom line for research or anything I read that is; does this make sense to me?

An example of this comes from a study that was done in Australia by some researchers I really admire. They found that mother’s breastmilk supply does not go up and down but stays about the same throughout 24 hours. Huh. My moms, and my experience as well, found that mothers seem to have the most breastmilk after midnight through noonish. Their milk supplies seem to be the lowest between about 4-10 pm. My clinical and personal experiences are challenging this research. Because of this, I haven’t incorporated it into my beliefs about human milk. On the other hand, this study is tucked into my mind and is a reference point that I, apparently, reflect on every time I think about milk supplies and when I teach about milk production.

Let’s get back to research and breastfeeding being best for human babies.

A few blogs ago, I wrote Breaking News: Formula Companies Want Your Money. It was about the formula company Similac and their new campaign. I now understand how truly clever Similac is! By creating a sisterhood of motherhood that encourages us not to challenge anyone’s parenting behavior and choices, they are creating a culture that supports formula feeding. And then you are more likely to feel OK or even good about using their product. Because your tribe is using it too! 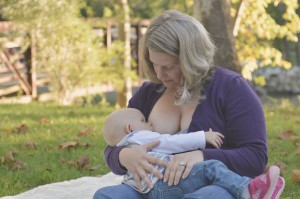 Back to Simulac, I think they feel threatened. That is where this new sisterhood is coming from, fear of their bottom profit line shrinking. They know the majority of new mothers want to breastfeed. Mothers want to do what is healthiest for their babies. But these mothers are falling into the “booby traps” from our culture and not reaching their breastfeeding goals. This is the real problem. Not that young families themselves don’t understand that breastfeeding is better. No, these same families are then lacking support from the rest of their tribe to reach their goals. Too many nay sayers who are happy to pass them that can of formula because breastfeeding challenges their belief systems. These are the people Simulac needs to reach. They need to keep the people who believe that formula is just as good as breastmilk (or better!) loudly sharing their views. I had a mother tell me that the head of pediatrics at a local, respected hospital had told her that formula was just as good as breastfeeding and her formula feed daughter was just fine, thank you! How sad. If our health care providers, who are suppose to be research and evidence based, aren’t believing the research, no wonder we are struggling.

In addition, I think the idea of formula feeding being an unhealthy choice scares people. I believe that fear often can make us cling to our old beliefs even when faced with daunting evidence to the contrary. The idea that, maybe, we have done something that is not the healthiest for our babies? Can we handle the benefits of breastfeeding but not the risks of formula feeding?

What can we do to fight this war on breastfeeding? Clearly, science is not the answer. What might be?

To help support breastfeeding, I run my weekly, free, drop-in support group. I am helping new mothers form a new tribe that is supportive of breastfeeding to help her reach her breastfeeding goals. These mamas are amazing!

Finally, I teach. And teach. I teach new families about breastfeeding. I teach nurses, doulas, IBCLCs, WIC peer counselors, public health workers, midwives, and even a few doctors, about how breastfeeding works and why it is important. I teach in a way that leaves lots of time for reflection and discussion. I have two- one day courses coming up. Initiating Successful Lactation and Lactation Pain Management. I want to challenge some of those old beliefs about how human babies are meant to be feed and slowly shift the other’s belief systems to believe the “Heaps of research, there is no doubt that breastfeeding is better for both the mother and child than infant formula.” Breastfeeding for human babies.