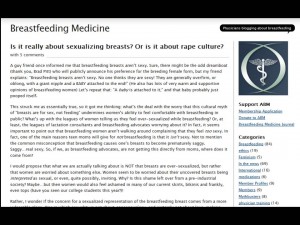 This train of thought started when I found this blog, “Is it really about sexualizing breasts? Or is it about rape culture?“. Iit really got my attention. This was an inflammatory title, it worked, I was intrigued and read it. Do we have a rape culture? Maybe this is an extreme statement but the fact is that the act of breastfeeding makes you very vulnerable. In many ways. The article proposes that the problem is not that breasts are over-sexualized, but rather that the act of breastfeeding itself, the uncovering of the breast, the exposure of the breast, is the issue. Could this be miss-interpreted as an invitation by the public, a come hither act from the mother?

Let me show you where I am going. In our culture, there is a very strong “she asked for it” feeling for rape victims. Short skirts and low cut tops, dancing in a sensual way, are considered by some, as women pushing men too far. To a place where the men have no choice but to sexually assault the provocateur. Jodi Foster in The Accused is a great example of this. Her character is gang raped and then she is blamed for asking for it by her manner of dress and her actions. Like Jodi’s character, these women are blamed for their rapes because they “set themselves up” for being raped. Being alone in a deserted area, out alone at night, exposing themselves physically, and by their actions. 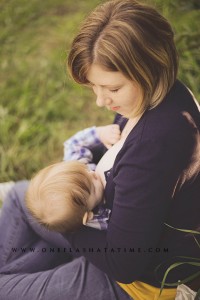 If we accept the idea of rape culture being a belief here in the US, and I feel that it is, what are we asking mothers to do while breastfeeding? First of all, the very act of being in charge of the care of a baby makes us vulnerable. The child’s safety and care come before our own. But then we ask that we divert our attention to the activity of breastfeeding, especially when the babes are little, for at least a few moments. Not being able to focus on our surroundings means that we have to trust that we will be safe while we are preoccupied.

Again, referring to the blog, the author asks, “Instead of being about sexuality, could we really be worrying about safety?…In a recent pilot study of an inner-city population in Rochester, I asked some questions about safety. Though still in preliminary data analysis, it has been striking to find that over 40% of the interviewed population would feel vulnerable, or unsafe, while breastfeeding in public, while fewer than 30% of women knew of a safe place to breastfeed or pump while at work. We’re talking feeling safe, here, not supported…It is well-known that women with a past history of abuse have lower rates of breastfeeding. Moms in our group who were white and suburban generally felt safer, but not as much as one would imagine.”

A great number of us feel unsafe, vulnerable while breastfeeding in public. Hmm… This could explain a lot.

Let’s talk a little about why breastfeeding mothers seem to be such targets for criticism. Who tends to get picked on by bullies? Those who are vulnerable. Maybe this is why we don’t harass people in public who are blowing smoke our way, people who are being obnoxious drunks, because they are not easy targets. But a mother with a babe in arms, what can she do? Maybe give an insult back. She can’t beat you up. Even screaming back at the bully is not likely with a little babe who might get upset by the loud noise. An easy target. An easy target also make the rest of us nervous. How many times, especially as a child, did you feel that another child was doing behaving in a way that brought negative attention to themselves. We would think, “Just don’t wear the Barney shirt! Put it away.” We knew the bullying is coming which would make us uncomfortable. Even if we aren’t the bully, it feels really bad to watch someone else get harassed.

25% of mothers in the US reported having been criticized or experienced prejudice while breastfeeding in public. That is a lot of mothers. We can then conclude that the idea that someone might emotionally abuse you while breastfeeding in public is very real. Having some stranger come up to you, while feeling vulnerable, and bothering you is a problem. Some of us might be like, bring it on! I am now. But I remember breastfeeding in public the first few times. I was embarrassed, flustered, didn’t feel like I was very good at it, and had to show my naked breast on purpose for the first time ever to anyone who happened to be around. As a “good girl”, I didn’t show my naked breast to random people. I felt so vulnerable. When my son was well over one year of age, I remember nursing him at the mall and this older man came over to me. I sat up straighter, put on my game face to endure the blow of his criticism. It turned out he complimented me and said he remembered his mother breastfeeding him and I was giving such a gift to my baby. But I was prepared for an emotional assault. Just that energy spent preparing for an attack, is more than I should have had to endure. I was expecting a problem. I was preparing myself for being emotional abused.

Upon reflection, I always felt best nursing with another group of mothers or with my partner by my side. I had protectors around me. Looking back on it, I was safe. I was discussing these ideas with my intern, and she said that there have been times when she just didn’t feel comfortable nursing in public in certain places. She couldn’t put her finger on it, why not there?, at the time, but now wonders if she didn’t feel safe and that is why she chose a different spot to nurse. 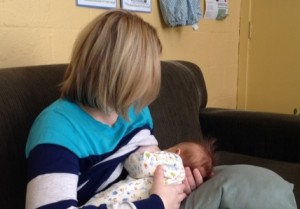 It occurred to me that cities where there is more violence in general have lower breastfeeding rates. Is this connected? If you aren’t safe period in some areas, how on earth are you suppose to feed your baby with your breast? This puts a huge obstacle in the path of breastfeeding unless you plan on hiding in your home for two years.

No wonder these breastfeeding pods at airports and stadiums are gaining popularity. You can go into a safe space and lock the door. Maybe this is why when we are pumping our breasts at work having a lock on the door is so important. Instead of having a “perfect space” for pumping, we want a lock. Maybe this lock is more important to the mother than whether the space is a bathroom or not. Safety before germs? Which is the greater threat? (I don’t think mothers should have to pump in bathrooms.) Maybe we aren’t getting to the heart of the matter in a culture that views women as targets.

Having a babe in arms and an exposed breast makes us vulnerable in public.
So, what can you personally do? Next time you see a nursing mother in public give her a supportive look with a little nod and sit near by. Sit up straight with a protective look in your eyes. You can make her feel safer.

By living in a rape culture, are we, by exposing our breasts, exposing ourselves to emotional and physical violence? What fool would want to do that? No one wants to feel unsafe. No one.